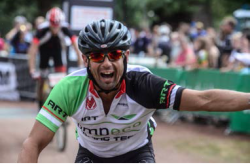 PRESS RELEASE 24. Juli 2015
No heat, no dust, and no pain can stop this team from accomplishing their mission. The AMPECO Racing Team has practiced all year long in order for them to succeed for a good cause. The company’s employees as well as their clients and friends once more bike to their very limits in order to collect donations for children in need on August 1st through 2nd.
Each year on the first weekend of August the team attends Europe’s biggest mountain bike event at the Duisburger Landschaftspark.
For 24 hours they race on an 8.5 km long circuit track. With each driven lap, The Freedom Village receives a donation from AMPECO. Their motto: „Passion overcomes Pain“, and nothing can stop them. Peter Ley, AMPECO’s CEO admits the race an be very challenging:
„Especially at night one can hardly see the track, it can actually very dangerous but it is worth it because we support a good cause!“
Since 2012 AMPECO has been racing to financially supporting the Peace Village International in Dinslaken/Oberhausen. It was established in 1967 as a citizen’s initiative to help children in areas of war and crisis. Peace Village offers medical help in the victims’ home-countries, and is mainly financed from donations. Last year the team was able to raise 1,000 Euro of donations for the www.friedensdorf.de
For the past three years the company V.V. Mineral has joined the AMPECO Racing Team. V.V. Mineral is the SUPERGARNET, an industrial mineral, producer from South India which is being represented by AMPECO GmbH Germany throughout Europe.
On August 1st through 2nd they will fight again:
One team for a good cause.