Most successful participation since 2012 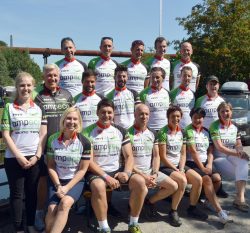 Since 2012 AMPECO GmbH, Dinslaken, takes part in the biggest Mountainbike Race of Europe which takes place in the Landscape Park Duisburg. This years motto was again “Passion overcomes Pain”. And with this in mind the AMPECO Racing Team, two teams consisting of friends, employees and customers, biked for 24 hours on the 8.5 km long circuit track. And finally both teams achieved a total number of 130 laps, so they succeed over 1,100 kilometers. As is well-known AMPECO pays a donation for every driven round to the Peace Village International in Oberhausen/Dinslaken. For many years AMPECO supports the Peace Village International, who takes care of sick and injured children from war and crisis zones since its founding in 1967.

Every year on the first weekend in August more than 6,500 crazy-for-bike people populate a tent city for three days in Duisburg. That means from Saturday 1st to Sunday 2nd of August more than 2000 Bikers from many European countries kept the industrial heritage site under control. Lap after lap, the drivers struggle for fame and glory, for the joy of mountainbiking, or as the AMPECO Racing Team, for a good cause. 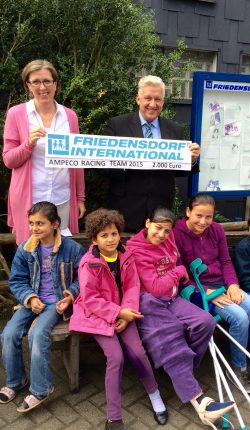